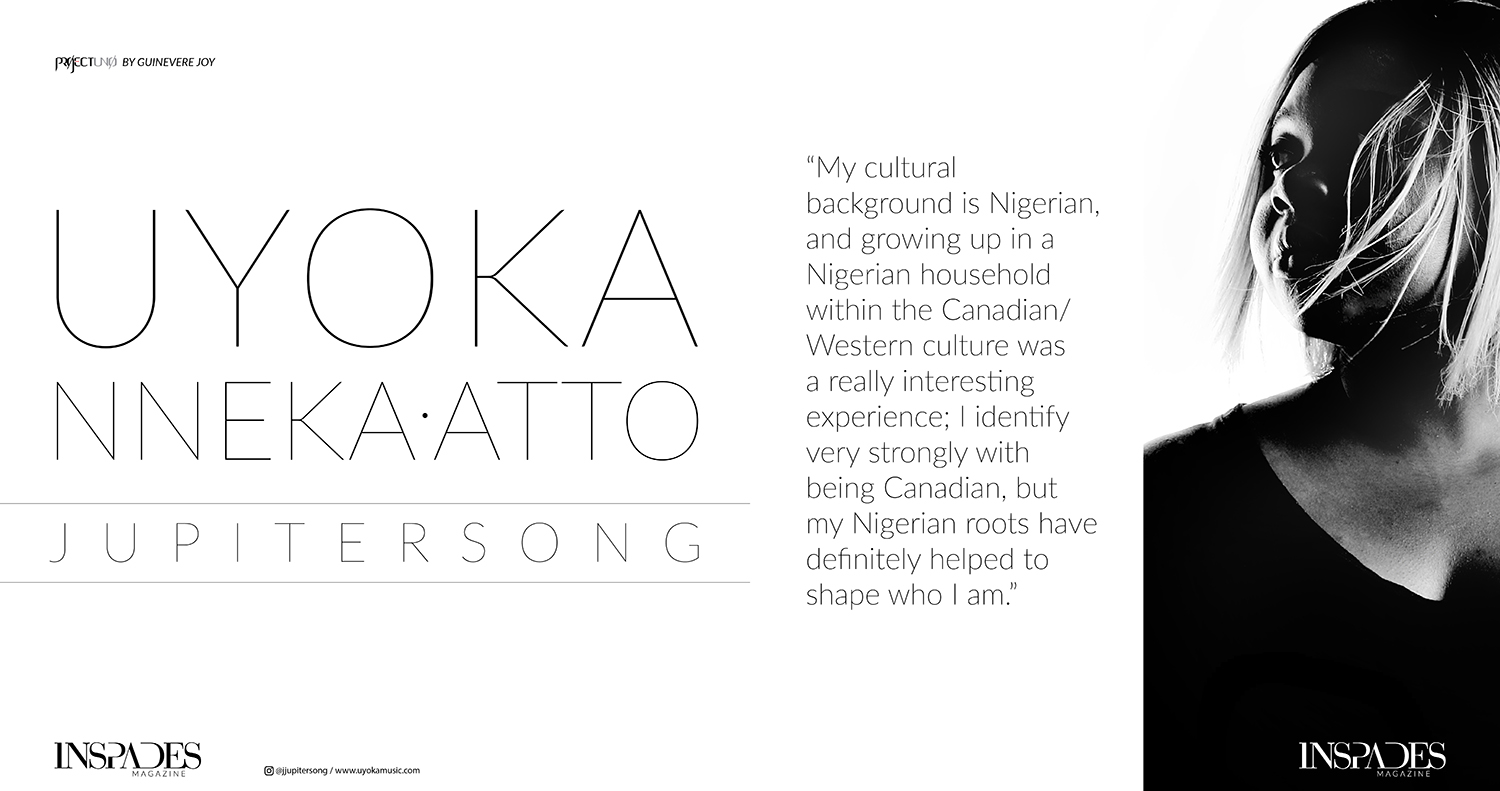 Toronto based singer-songwriter Nneka Atto, known in the music world as Uyoka, recently released her album Jupitersong. As the title suggests, the album is as great and mysterious as the planet that it is named after. According to Uyoka, the planet Jupiter signifies knowledge, higher learning, exploration and expansion. In astrology, each of the zodiac signs is ruled by a planet and, being a Sagittarius, she feels a connection to Jupiter in this aspect as well.

“In a sense, it was like I was learning and exploring more about myself through these songs,” reveals Uyoka, “Sagittarians are known to be the philosophers and curious explorers of the zodiac, and Jupiter is all about big visions and expansion. Both of these aspects can be found within my music.”

Although Uyoka has called Toronto home for most of her life, she has familial ties to Nigeria. Growing up with her family in the greater Toronto area, her artistic talents were nurtured by a constant stream of music that played in her home. From country to rock, to jazz and also traditional Nigerian music, her exposure to sound was diverse.

“Traditional Nigerian music, as with most African music, is melodic and chant-like with very bold rhythms, which have influenced the melodies that I write,” she shares, “My artist name, Uyoka, also has Nigerian roots: it’s a portmanteau of my first and middle names, Uyoyoghene and Nneka.”

Uyoka’s talent for writing was also nurtured from an early age, having written her very first song at the age of thirteen. In that moment, the joy that she experienced from creating a finished work of art led her to realize that writing music was the path she was destined to follow. Although she has dabbled in painting, drawing, and even self-published a children’s book, Ollie’s Carrot, writing music was always her heart’s calling:

“Although I am an alternative rock artist, I love and appreciate the music of all genres. Because of this, my taste in music is highly eclectic. With my work, what I try to do is fuse bits and pieces from all of these different styles, and the sound that I create is very explorative and experimental as a result. The songs have such complex, intricate layers, reminiscent of the swirling, dancing patterns of the album’s namesake.”

The uplifting songs from Jupitersong were written in her late 20s which, for her, was a time of soul-searching. “During that time, I reflected a lot upon who I am, what I’ve done, what I want to accomplish, and the type of person that I want to be,” she recalls.

Uyoka has a self-described unorthodox style to creating music, as she relates to music on an intuitive level. The fact that she has never studied music formally does not interfere with her ability to create melodic tracks. Like Uyoka, scores of musicians have a keen ear for rhythm and perfect pitch without prior knowledge of formal musical technicalities. Uyoka discloses: “My strength is in being what’s called, a ‘top-liner’. I compose vocal melodies and write lyrics. As I don’t play any instruments and I can’t produce music, I rely on a producer, musician or instrumentalist to create the actual music for me. Once I’ve got a track, then I can get to work.”

To create her songs, Uyoka retreats from the chaos and speed of the city to look inwards:
“During my writing process, I like to be alone with the music in a quiet place and allow the music to speak to me. We live in such an incredibly vast and ever-changing world, no matter how long we live, I don’t think we can ever really know it all.

With a new album and budding musical career under her belt, Uyoka will continue to produce tracks with uncompromising integrity, filled with meaningful lyrics and beautiful rhythms.